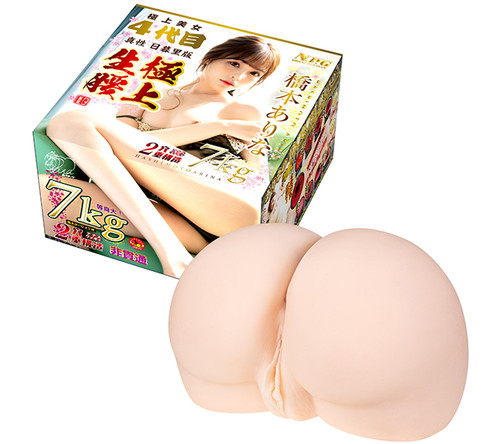 Important Note: Manufacturer stated that due to the weight of this product, minor crease may be visible on the surface of the toy. This does not affect the function and usage of the product in any way and is not consider a defect.

NPG is one of the oldest manufacturer of pleasure product in Japan with a focus on Japanese AV Actress based onahole and hip masturbator. To end 2020 with a bang they have release the fourth version of their realistic AV actress masturbator hip called Extreme Pleasure Hip Shinsei Fourth Generation represented by AV actress Arina Hashimoto. With a slender body and a cute face, the super popular AV actress Arina Hashimoto's lustrous and superb bare waist is realistically reproduced with a weight of 7 kg! This hip masturbator is in a sexy doggy style position as Arina is ready for you to just spread and enter the hole of your choosing. It is consists of a two layer material construction in both the closed ended vaginal and anal tunnel filled stimulating folds for the most realistic experience. In case you are unfamiliar with two layered or Dual-layer material design, it is where the walls of the tunnel is made from a different material than the rest of the item. This type of design allows for one material that may produce a better tactile feel on the outside while another lines the inner tunnel for a better experience during use. Be sure to check out all the pictures above to get a complete idea on the internal design of Extreme Pleasure Hip Shinsei Fourth Generation. Made in Japan from quality materials.