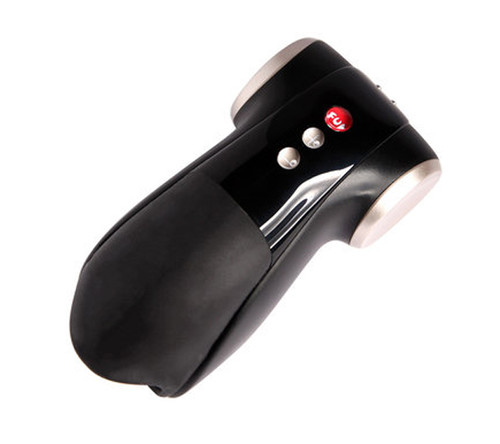 The COBRA LIBRE II is an updated version of the FUN FACTORY classic COBRA LIBRE. With a new control unit that's now even easier to use, and thanks to the key lock and quick switch-off features it is more convenient than ever! Press FUN to play!

With the number two, nature made sure the overview of gender variations was manageable. So it's easy to believe that advances in sex toys are constrained by natural borders. Yet, because progress is ambitious and fast, it has surpassed this idea with a toy for men, which has gathered attention, and much more as a successful example of living bionic (or uniting biology and technology). The sexual act unfolds as usual, but everything else is pleasantly new. When the penis enters the COBRA LIBRE II, it is gently wrapped by soft silicone and pleasures the most sensitive part, the glans. So snug, so good, but the COBRA LIBRE II is more than a coital simulator it's also a super sensitive stimulator.

With its 11 vibration patterns, the COBRA LIBRE II heads confidently for the next climax – and always ready to please from sensitive to demanding.

Using the newly designed control panel with touch buttons, both of the powerful motors in the COBRA LIBRE II can be navigated from gentle waves to ecstatic speeds. Finely tuned programs and intensities even make the most discerning men feel like they are taking the fastest ride of their lives. With the handy control unit that now goes underwater and with a practical key lock for adventures that can travel with you! With its futuristic design, it's no accident that the COBRA LIBRE II really catches the male eye. One the one hand the toy, thanks to its sporty-ergonomic shape, is easy so handle, and on the other hand the colors add a finishing touch.

Important note: Please ensure that the toy is fully charged before using it for the first time! Charging can take up to 12 hours! Please also note the information contained in the instruction manual. Thank you very much!